A Legend is born. 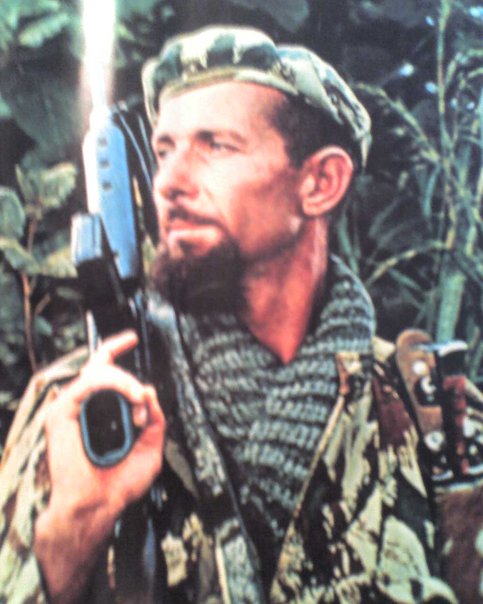 War came to the Niassa province on September the 24 1964 with an attack by 7 guerrillas on Cobue, the next day another Frelimo attack led by a Mateus Malopa, fired upon the navy patrol boat “Castor” while on patrol on lake Niassa. The two Frelimo groups then returned to Likoma Island. The next attack in Niassa was only in December of 1964, when a Frelimo group attacked Olivensa some 28 kilometers from the Tanzanian border. Probably the first counteraction by the Portuguese against Frelimo was on January the  5th 1965 when the Marines attacked Ngomba where Frelimo had a camp of some 50 to 60 men, the attack lasted over three hours, the Marines did not land  during the attack and it is not known how many casualties Frelimo suffered (if any). Many say this was the real start of the war In Niassa. It is doubtful that Daniel was involved in the actual attack but is most probable that the Marines used his intelligence in planning the attack.

While 1964 saw the start of the war against Portuguese rule in Mozambique it was the period 1965 to 1969 that saw a marked increase in Frelimo activity in the Niassa province. Due to this increased terrorist activity in northern Mozambique the army sent in three thousand new conscripts to help stem the tide of this insurgency. It was most likely during this period that Daniels fame started to spread and the legend was born.

After their tour of duty the conscripts would return to Portugal with a  story or two about Daniel Roxo, even a photo perhaps that they could use to say they knew the “White Devil” or the “Red Bearded hunter”. For many of the upper class officers in the Portuguese army he was a “barbarian”, “the unruly civilian” that used unorthodox methods to get the job done. I was told by an ex officer that “The -  peasants that had been sent to Africa to fight the war knew nothing about Daniel and invented the most fantastic stories, about his abilities and exploits, thus falsely creating his legendary status”.

With the increase in terrorist activity Governor da Costa Matos made a decision to use Daniel and his men as a “Search and Destroy” unit in the Niassa province with his initial instructions being that Daniel and his men should not venture further than 100kms from Vila Cabral. The unit would have no helicopter support and was to be re-named “Milicia de Intervencao”.

Daniels militia was in effect the “private” army of the government of Niassa, his  function was to track down Frelimo by spending a few days or longer out in the bush and then return to camp in Vila Cabral to protect the area and at the same time rest. It was an active “rest” as Daniels men would patrol around Vila Cabral in small groups  of between 3 or 4 men to mix with the local population and gather information.

Other local militias in Mozambique were there to protect and intervene around a specific area of responsibility they had a variety of names such as Milicia de Proteccao (defence militia under command of a Portuguese police official) they were also commonly known as Milicia de Aldeamento there was also a militia set up to protect the railways that was called  Milicia dos Caminhos de Ferro.  The militia in Tete which people also mention when Daniel is discussed was only used for local defence and was not an intervention militia like Daniels.

Daniel had access to intelligence from the Army and PIDE/DGS via the SSCIM* (Civil intelligence department of the governor general of Mozambique). There is a misconception that SCCIM was a branch of PIDE/DGS or the Army in Mozambique and Angola, this is not correct, the SCCIM was an advisory board for the exclusive use of the Governor General in LM. The SCCIM had numerous informers all over Mozambique that collected intelligence for strategic use only. It’s probable that Daniels intelligence was shared by Costa Matos with Colonel Correia of SCCIM and that relevant  intelligence was passed on to Costa Matos from LM.

It was also during this period that Daniel  realized the only way to fight and beat the terrorists was to engage them on their own terms and to achieve this ensure that both he and his men where better armed, better trained and better motivated than the enemy they were facing.

Seeing that Daniel was a civilian his title was “Commandante das Militias”and not “Chefe de Posto” as has been suggested. Daniels rank was the equivalent of a Sergeant or at best Lieutenant in the army or a Sub – Chefe de Policia da PSP, who also had command of militia or GE groups. If the Portuguese authorities had  ever declared a state of emergency “And they came close in March 1974” Daniel and his men would have been integrated into the defence force and his rank would have probably been that of Sergeant with a few of his men being promoted to the rank of Corporal.

Over the period October 1966 to November 1967 it’s estimated that the army in Niassa province killed 221 Frelimo and captured 6 so it would seem that a combination of Daniels intelligence gathering as well as his assistance with the Portuguese troops in the field was in fact paying dividends. It was in 1966         when Colonel Nuno Viriato Tavares Melo Egidio replaced Governor  da Costa Matos as Governor of Niassa. Governor Egidios brother was a civil administrator in Vila Cabral and he was to become his secretary, as soon as he took over the governorship. Informed sources believe that it was Governor Costa Matos that had championed Daniels career, but that Governor Egidios brother also knew the value of Daniel and told his brother that he should keep the services of Daniel and his men.

By early 1968 Daniel had a compliment of 35 men  with a  number being turned Frelimo terrorists. Daniel and his men were involved in a operation that was conducted north of Vila Cabral from 1-11 April 1968, the Portuguese military named it operation Marte (operation Mars). Daniel together with 26 of his men and supported by 90 men from 4th Company Commando’s, based in Vila Cabral took part. During this operation Daniel and his men were responsible for killing 16 terrorists and capturing 6, with over 1 ton of arms, ammunition as well as documentation being seized.

Daniel was regarded by those who got to know him as a good man and a loyal friend, it seems however Daniel was selective in choosing his friends, but would always be there for you if needed. Everyone whether Portuguese or South African all agreed that Daniel was an outstanding leader of men and a good soldier, Daniel was well loved by the local white and black residents, so much so that when a rumour that Daniel and his militia where being head hunted by the Rhodesian security forces to set up a unit to combat the influx of ZIPRA terrorists coming across the Mozambican border from the TETE province into Rhodesia there was a delegation sent to the Governor by the residents that gave him an ultimatum “ If Roxo stays we stay, if Roxo goes, we go”.

Daniel always left a “calling card” on the bodies of the men he or his men killed. The card had a black cross on a white background and the message written in very plain Portuguese was “This man died. Why? Because he was going around armed to do malice in Mozambique, on behalf of the leaders of FRELIMO, who want to sell this land over to the foreign communists, the Russians and Chinese. He was making the people suffer, people who used to live in the past in peace, so that those leaders, can have their pockets full of money and lead a good life abroad”.

Daniel was very close to his men and expected them to do nothing that he would not do himself. A number of them had been with Daniel since his hunting days and needed him to lead them.

Daniel it’s been written was asked to join the Flecha’s in Mozambique first in 1971 when it was rumoured that Oscar Cardoso had been sent to Mozambique to set up a unit similar to that operating in Angola at the time and again in 1973 when Alves Cardoso did in fact set up a Flecha unit in Vila Pery. While on both occasions Daniel was consulted about this very issue, in 1971 he declined the offer and in 1973 it was decided that Daniel was best left in the Niassa province doing what he did best, kicking Frelimo’s ass. Daniel was however asked by Alves Cardoso to evaluate the readiness of his men for operations after their training had been completed.

Around mid June 1974 Daniel was visited in Vila Cabral by a good friend, someone whom he trusted and who had knowledge as to what the true situation was in the country at that time, by mid July Daniel was paid a visit by another  friend and he has no doubt that Daniel was very aware that he and his family where no longer safe. If Daniel was not thinking of leaving Mozambique  at this stage, its probable that events at Omar in Cabo Delgado early August tipped the scale. The unconditional surrender of 160 Portuguese soldiers to Frelimo and lack of follow up to rescue the men by the Portuguese military who were later put on public display in Dar-es-Salam was described at the time by renowned journalist and author in his book The Scorpion Sting as “An gross example of imbecility and in the annals of military history perhaps one of its sorriest tales”. This is a story that still needs to be told in full .

This together with the meeting in Vila Cabral as well as advice from trusted friends probably motivated Daniel to apply for official leave and gauge for himself what was in fact happening in Beira and Lourenco Marques so that he could make an informed decision as to his and his families future in Mozambique.

Daniel decided to move the family to Beira and after he had made plans for their safety he would speak to friends and family in both Beira and LM before making a decision on his and the families futures. Daniel took official leave, packed the car and made the more than 1000 km trip from Vila Cabral to Beira. In Beira he spoke to a number of contacts in the GEP’s and saw with his own eyes that as a combat unit they were finished.

After meeting with his GEP contacts Daniel possibly mulled over the idea of going to Salisbury to see if the Rhodesians were not interested in his expertise and that of his men, rumours had been doing the rounds that the Rhodesians were looking to somehow incorporate Daniels militia into their own military structures as well as the fact Ron - Reid Daly had been tasked in late 1973 to form a unit called the Selous Scouts and he was looking for suitable men that could conduct pseudo operations against ZANLA and ZIPRA. Daniel sought the advice of a friend who told him to rather go to LM first and gauge the situation for himself as well as speak to his brother Alipio and not just rely on rumours that had been circulating. Daniel made sure his family were safe and took a flight to Lourenco Marques to see for himself what was happening he also spoke to his brother Alipio.

Your comments will be submitted to me for approval before it appears on this blog as we do not want incorrect information or slander to appear here.

Click on the Picture to see more,
and buy online